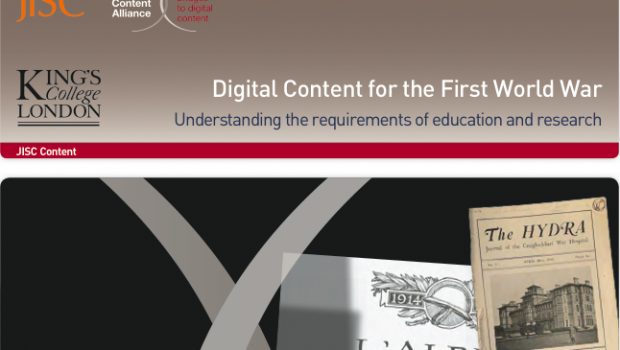 As mentioned on our ‘About‘ page, the WW1 Discovery project has been building on the work undertaken by Kings College London, to identify and synthesise First World War content as well as identifying the requirements of researchers and teachers.   We’ve been working directly with Kings so we’ve had access to the information as it’s been developed to help inform our own project, but I’m now pleased to say that they’ve documented their work in a report released yesterday, ‘Digital Content for the First World War (PDF)’:

First World War: are we getting the complete picture?

The First World War is one of the most widely covered topics in further and higher education and schools, but according to a new JISC report, little is known about what aspects of the War are being taught, the key research questions or indeed the digital content available to support education and research in this area.

The new survey report by the JISC-led Strategic Content Alliance, Digital Content for the First World War, based on a study by King’s College London, addresses these questions for the benefit of people managing digital resources in universities, libraries and museums.

The report argues that the Centenary of the War in 2014 offers digital content creators the opportunity to reappraise received notions of the experience and legacy of the conflict across disciplines.

For example, they might choose to create digital resources for aspects of the War that have been little explored – such as the global nature of the War, medical and nursing history and the study of wider economic and social issues.

William Philpott, Professor of the History of Warfare at King’s College London, said: “The findings of this report will prove of exceptional interest to scholars of the First World War.  It identifies the diverse range of approaches to teaching about the Great War and demonstrates the enduring interests in the subject as the centenaries approach.”

To draw attention to the breadth of underused content in small and medium sized collections as well as to encourage collaboration between people working on them, JISC have also funded King’s College London to develop a new online resource UK World War One Collections.  The database allows researchers and content managers to search for UK university, archive, library and museum holdings relating to the conflict, saving them time and potentially reducing duplication of effort.

Sarah Fahmy, Strategic Content Alliance Manager at JISC, said: “By understanding the needs of academics and researchers studying the First World War, we are better placed to create and enhance content that will suit their educational requirements.  This report and the database are valuable as they encourage content creators to ask the right questions before starting work on their digital collections.”

JISC is responding to the report recommendations by working strategically with other organisations and academics to create and enhance content – for example creating cross-disciplinary open educational resources that will offer the opportunity to reappraise the War and its social, historical and cultural ramifications through the University of Oxford’s World War One Centenary: Continuations and Beginnings project and the Serving Soldier online collection at King’s.

JISC’s recent work with Wikimedia UK brought together academic experts and editors of Wikipedia (Wikipedians) to create and improve Wikipedia articles on World War One topics. It means that students, researchers and the public can now access accurate, consistent, wide-ranging Wikipedia articles that are as up-to-date as possible and there are now new links between Wikipedian and academic communities.

The report also highlights that to create unique and compelling digital content for the benefit of education and research, funders, content providers and other agencies need to work together.  By building mechanisms for collaboration, any potential investment goes further and delivers better services for less.

Catherine Grout, JISC eContent programme director, said: “The forthcoming centenary of World War One provides us with a remarkable opportunity to utilise information and communications technology to provide researchers and students with unique insights into the ‘war to end all wars’.  JISC shares a unity of purpose with other organisations across the UK to ensure that current and future generations of learners, teachers and researchers have access to the best that digital content and resources can offer, including providing access to many new and important resources.”

3 Responses to First World War: Are We Getting the Complete Picture?